Time has flown by and the end is near

InteRDom Correspondent, Alexandria, has completed three years of her Bachelor’s degree in Sports Administration and Spanish at the University of Miami, Florida. She is participating in the 2013 10-week Caribbean Summer Program. You can read more about Alexandria and her participation in the Correspondent Program here.

With a little less than two weeks left in the country, I cannot believe my time here has gone by so quickly! While I am excited to see my friends and family again in the US, I cannot help but feel sad to have to leave the friends that I have met here, socially and at work, and this beautiful country that has been my home for the past 10 weeks. It feels like just yesterday I landed and was full of excitement on the way to my new apartment. Now, I am trying to take advantage of the time I have left and experience more.

This past weekend, two friends and I ventured to Cabarete and Imbert. We took Caribe Tours, the Dominican version of the US Megabus, which was a pretty relaxing long ride. Cabarete is a small ocean town on the north side of the country. The beach there is lined with restaurants and as you look out into the ocean you can see the many kite and wind surfers. We also stayed at a cute local hostel for only $20 (breakfast and dinner included). I will never forget Cabarete because it was the place where I took my first ride on a motoconcho*! Riding a motoconcho in “el campo” (definitely not in the city) was one of the last things on my to-do list, and I was so excited that I got to ride one! My friends were telling me that as they passed me by, all they saw was a big smile on my face. After staying the night in Cabarete, it was now time to go to Imbert.

Imbert is a mountain town in the north of the country. We traveled for about an hour in a guagua that was meant for 12 passengers but at one point, there were definitely 25 people inside! Once we arrived in Imbert, we then went to 27 charcos, which is an adventure tour that has 27 waterfalls and people are guided through them. After getting our life vests and helmets, my friends and I were introduced to our 17 year old tour guide. He guided us through the forest and after eating mangos and an hour of walking we arrived at our first waterfall. You could either slide down or jump off a pretty steep cliff, and even though I do not like heights, I decided to jump. I was so scared but I was so happy I did it. My friends and I completed the 12 waterfall tour and it was definitely an experience that other people should do! After our lunch buffet at 27 charcos, it was then time to head back to Imbert…which means…motoconcho time! I loved riding through the countryside!

As we arrived in Puerto Plata to return home, our weekend getaway came to an end. 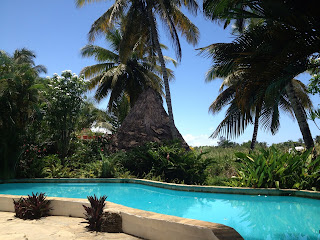 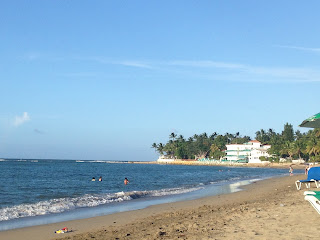 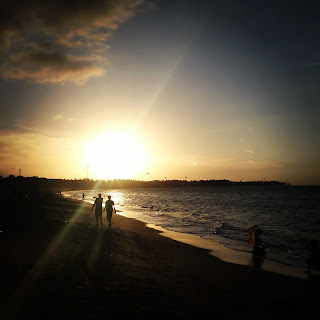 *Neither the InteRDom program nor its parents institutions, GFDD and FUNGLODE, promote the use of motor-taxis or “motoconchos” as a form of transportation. Students are informed as to the risks of riding these vehicles both before departure and during their orientation to the program, and understand that in riding them they are doing so at their own risk.*