My boss is in a good mood

“¡Levanten campamento!” shouts Mr. Ortiz as he comes storming out of his office with suitcase in hand and switching the lights off. Malge, Domingo and I are immediately possessed by a secret smile. That is our boss’s way of giving us the green light to go home and for the first three days of the week, it was an identical scenario. We were dismissed awfully early and the workload we had on our desks went from very little to none. I even took the freedom to draw on a bunch of yellow post-its; scribbles keep my mind going as everything else outside follows a slow pace. No sessions at the Congress, only a few files coming in the department to be revised, less reporters and people roaming around the hallways; there was a sense of stillness, in which I felt completely at peace. Our boss cracked jokes, he was seen around more and he replaced his usual motivational speeches for random, impersonal small talk. In this abnormal situation we stayed at ease because we knew that it consisted in a false calm before the storm. I marked my words.

Thursday arrived and there it was, waiting for us, a pile of manila folders on top of the secretary’s desk. And there he was, he knew it all along; the chief director came in laughing as he saw our future together with what seemed like a thousand documents. Something told me that I was not going to hear the pleasant phrase I had heard very early the former three days until at least sunset. My predictions did not fail me once again, but there was an unexpected twist to the story. Our boss happily announced to us that we had to prepare a presentation on a specific subject, which he gave us, to present the next day in front of all of the lawyers in the other legal departments of the House of Representatives. No smile from our part this time, but he was still in a good mood. To heal our wounds he bought us pizza and as we struggled to juggle between turning the huge pile into a smaller one and writing an essay-type of discourse about a subject that was, at least to me, completely unknown, we fed our minds and body with cheese, ham, tomato sauce and a lot of carbohydrates. On top of which we had a restraining order that kept us from reaching even 10 meters away from the door until our job was done.

With barely any sleep, we came like zombies next day to work. Our boss greeted us and the first thing I noticed is that he was no longer in a good mood. He had revised our work for the meeting we were scheduled to have in an hour and decided to change his mind regarding our respective speeches. Even though we were kind of disappointed not to reach the level he was requiring from us, we had been relieved from our duties and I could go back to the state of peace of mind from the beginning of the week. The meeting went great. The idea behind it was to share the common problems we saw in all files and set homologous criteria to face them. Ideas clashed, and interpretations of laws and the Constitution, led to some very heated arguments. I kept quiet and watched as lawyers defended their position. I was glad to finally hear some soundtrack after a couple of days in complete silence. Because the reunion went so well, our boss, who had led the conversation, was in a good mood again. He even announced a paella day for the following week. Storms are not so bad after all. 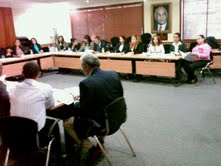 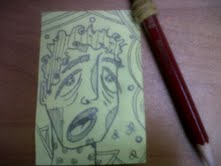