We have finally started working! I know you guys were probably thinking I’m here in paradise on vacation all summer long, but we actually have an internship. We work in the legal department of the largest insurance company in Latin America and our supervisor, Doña Josefa, knows everyone who is anyone in Santo Domingo, so we’ve done a lot of rotating between different legal departments within the city so that we can, in her words, “saber todo de la ley dominicana! (know everything about Dominican law!).” We’ve been to both traffic and criminal courts to observe the differences in the legal systems (as compared to the American legal system) and there are definitely a lot. Judges and lawyers here have to wear special robes when in the court room which feature berets adorned with colored balls on top. (Judges wear one color, defense attorneys, another, and so on). Besides that, we generally work in the office and assist the attorneys in the department with whatever tasks they ask of us. Our biggest responsibility is to review policies to ensure that the general and specific conditions of the policies offered by the company are in accordance with relevant Dominican law. No matter what, though, we aren’t allowed to speak English in the office. Our coworkers are so excited to help us better our Spanish!

Outside of work, I finally made it to the beach. My roommates and I have been to Boca Chica 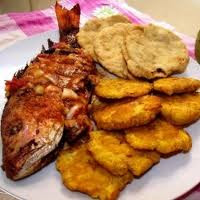 twice, and although I thought it was beautiful, apparently it’s nowhere close to being the nicest beach the country has to offer. The sand was white and the water, the most beautiful turquoise I have ever seen, so I can’t even imagine anything being more amazing that that. It was more gorgeous than any beach I’ve ever seen in the States. How nice it must be so nice to live here and have your pick of alluring beaches! Anyway, while we were lounging on the beach vendors came up to us selling everything ranging from fresh seafood and coconuts to CDs and wooden sculptures. There were also food stands that sold fresh fish which the vendors fried on the spot. Being the adventurous eater that I am, I just had to try. L and A were too scared to try, so my newest roommate and I split a plate of fried fish (it was HUGE) and tostones. It was so delicious! 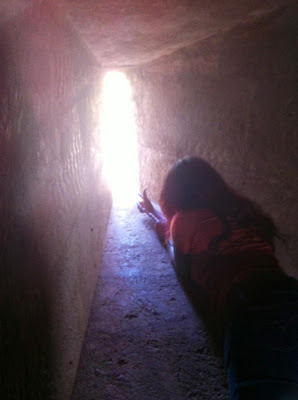 In cultural excursion news, last weekend we took a three and a half hour tour through the Colonial Zone. We visited a cathedral in the heart of the zone which I was told was the oldest gothic cathedral standing in the Americas, dating back to the 16th century. I thought it was absolutely beautiful despite the fact that laid within the floors and walls were the tombs of countless men who had been buried there centuries before. The most interesting part about the cathedral, though, was that it housed the tomb of Christopher Columbus! Yes, the Christopher Columbus that we all read about in school books who “sailed the Ocean Blue” in 1492! Although we couldn’t actually enter the tomb since it was roped off, it was still cool to be that close to a piece of history that I have heard so much about. 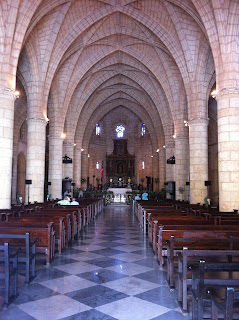