There’s never a dull moment on the InteRDom program! Aside from the 4 cultural trips around the Dominican Republic, InteRDom organizes a series of informal “get-togethers” to give students the opportunity to catch up with one another, share ideas about their internships and classes and get to know different places in Santo Domingo.

In the Summer of 2009, the interns have had the opportunity to go on a number of sponsored get-togethers, including a pizza night, a 4th of July party, a meeting with the Director of FUNGLODE and a tour of the National Congress building.At the pizza night, the interns were joined by Dominican journalism interns from Listin Diario’s “Journalist for a Year” program, giving them the opportunity to share experiences about university life and internships with one another. The Listin Diario interns also proved to be a wealth of support and knowledge for the InteRDom interns working on research and study projects. All of this against the backdrop of a truly Dominican pizzeria, and the night was made! 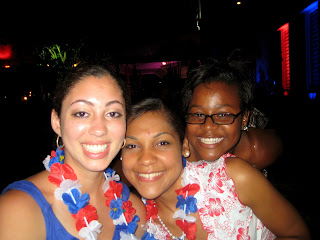 The 4th of July party was another spectacular evening! The interns were invited to the house of the United States Ambassador in the Dominican Republic for their annual Independence Day Celebration. The extravagant poolside celebration, featuring lavish buffet tables under 3 large tents, was an excellent networking opportunity for the students, who had the opportunity to meet both American and Dominican officials such as Max Puig, Dominican Secretary of Labor; Miguel Vargas Maldonado, President of the Partido Revolucionario Dominicano; and Roland W. Bullen, Minister-Counselor of the U.S. Embassy in Santo Domingo, as well as various journalism and television personalities.

In addition to these social activities, InteRDom students were also invited to a meeting to meet the new Executive Director of Fundación Global Democracia y Desarrollo (FUNGLODE), Marcos Herrera, and to tour the National Congress building by Senator Dominguez Brito of Santiago. Both events were excellent networking opportunities, as well as a chance for the students to ask questions and get a more behind-the-scenes look at how government and politics function in the Dominican Republic. 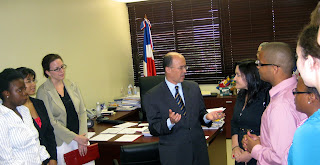 All of this and the summer isn’t over yet! There’s even more in store for the Summer of 2009…Stay tuned!