Christine Martinez studies Global Studies with minors in journalism and Spanish at San Jose State University in San Jose, California. She is participating in InteRDom’s Fall 2011 Academic Semester, taking courses at a local university and carrying out a research project specially structured for her by InteRDom staff on thebusiness of baseball in the Dominican Republic. The articles that she produces will be published on this blog under the tag “InteRDom Experience Series.” To read more about Chris’ experience with InteRDom in the Dominican Republic, read the InteRDom Experience Series on the InteRDom webpage.

To understand baseball in the Dominican Republic, it’s best to consult the best man for the job.Epifanio Guerrero has signed more players to Major League contracts than any scout, has produced World Series winning talent, and has won loads of awards for his accomplishments. He continues his work as an independent scout in the Dominican Republic today. These days, Epy is an affable guy who’s eager to tell stories of his 40 years in baseball. His house at his training complex in Villa Mella has a room full of pictures of his players, articles about his work, and awards for his achievements.

Guerrero’s success in the sport can be summarized in a framed photo sitting in his Santo Domingo home. It’s the three newest members of the Baseball Hall of Fame and Museum in Cooperstown, N.Y.: right-handed pitcher Bert Blyleven, infielder Roberto Alomar, and executive Pat Gillick. The trio was inducted into the Hall of Fame this July, and Guerrero was on hand to celebrate with Alomar and Gillick, two men who owe much of their success to Guerrero.

Guerrero worked as a scout in the Toronto Blue Jays organization, signing and developing players like Carlos Delgado, Tony Fernandez, and Damaso Garcia. In 1991, fourteen of the players on Toronto’s 40-man roster were guys Guerrero signed and developed. The following year, the Dominican Summer League Blue Jays won 38 games to start the 1992 season before finishing 68-2. 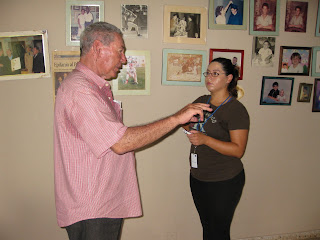 Artifacts of both milestones are also in Guerrero’s Santo Domingo home. There’s a picture, yellowed with age and hanging on the wall, of Guerrero standing with seven of his kids in 1991. A white baseball cap embroidered with the old Blue Jays logo and a special inscription of the DSL team’s 38-0 record hangs on his bureau.

Of course, there is the big prize of the Blue Jays organization. Toronto won back-to-back World Series titles in 1992 and 1993, thanks in no small part to Guerrero’s talent pool. Alomar was one of the offensive stars of those teams.

Gillick was the general manager of the Blue Jays when they won their world titles and went on to win another World Series with Philadelphia in 2008 before retiring from executive work.

Guerrero built the Toronto teams for Gillick, someone he’s still close with and refers to as a father figure.

Guerrero has also scouted for Houston and Milwaukee but has seen the greatest achievements of his career come in Toronto. Now he works for himself, developing Dominican kids independent of any one team.

Guerrero’s legacy in the Dominican Republic can be seen in the talent he sends to the Major Leagues, but also in his most important organization: his family.

It’s clear that Guerrero values family in baseball. His sons Sandy, Patrick, and Mike all work in the sport. Sandy is the hitting coach for the Triple-A Nashville Sounds in the Brewers organization and Mike was a manager for Double-A Huntsville, also a Brewers affiliate, in 2009. Patrick works with his father in the Villa Mella camp.